Home entertainment used to be about prime time—those few precious hours at night when the whole family would tune in together for a movie or the latest installment of their favorite show.

But things have changed. We’ve even got a new word for the consumption of our favorite movies and television programs: we no longer watch, we stream. Once beholden to scheduled air times, we now stream whenever, wherever; so long as we’ve got a device with a screen and a decent wifi connection. And with everyone having (at least!) one device handy at all times, there’s no need to compromise with your family on what to watch. With hundreds of streaming services, tens of thousands of programs to choose from, and the ability to burn through entire seasons as fast as we like, we now consume TV and movies like avid readers consume books.

This is exactly the kind of cultural shift that gets our spidey senses tingling at dscout. So we ran a simple “moments” mission to explore it. In a 4-day study, scouts were asked to capture at least six real-life moments in which they were streaming some kind of media. For each moment they submitted, we asked them to explain why they’d chosen a particular show or movie and what contextual factors influenced this moment.

When we dug into the 139 streaming moments we captured—tagging each based on what we observe in the videos, photos and open-ended responses—it became abundantly clear that our viewing behavior is evolving rapidly, with people streaming to accomplish very specific tasks in their day-to-day lives. That’s what we researchers like to call “modes.” 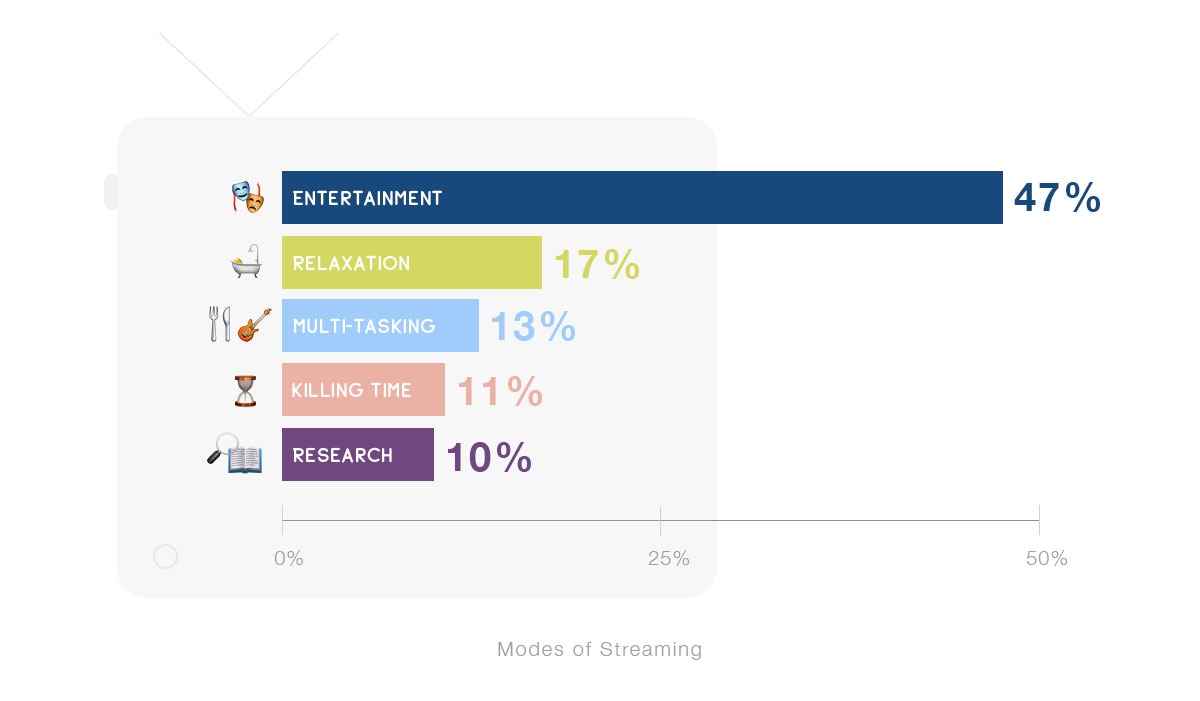 The first of these modes, multi-tasking, stands in stark contrast to the lean-in prime time hours of yore. 13% of the streaming moments showed streaming as part of routine multi-tasking—whether that be catching up on the latest episode of a show while eating lunch, or streaming something in the background while you concentrate on something else. Scouts use these streaming moments to kill two birds with one stone, rather than immerse themselves in the show, as with traditional lean-in watching. In these cases, entertainment is an added bonus. The primary objective of the streaming session is not necessarily streaming, but instead, getting something done. 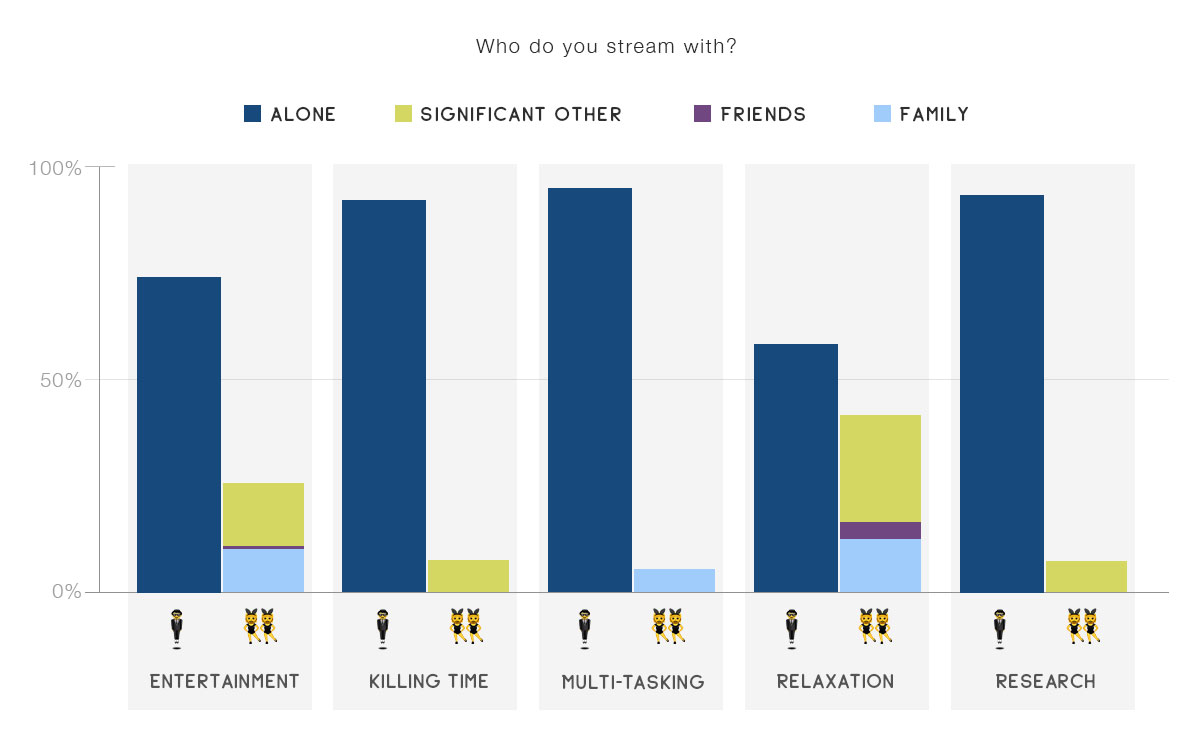 When it came to deciding what to watch in this mode, scouts knew what kind of content would work, and opted for “easy to watch” content in 72% of moments. Scouts were also alone in almost all of these moments (94%), oftentimes streaming while working alone at home, studying, or as they completed household chores.

Another task-oriented use of streaming was to research or explore something. In 10% of moments, streaming had a productivity-driven viewing objective. Learning to knit by streaming YouTube. Preparing for freshman year of aerospace engineering by watching space documentaries. Linguistic immersion by watching Arrested Development in Spanish. These moments are very diverse in type of content, but a majority of them used YouTube and happened on a tablet or laptop.

While the first two modes are about getting something done, streaming is also about unplugging our brains at the end of the day. This style of streaming, where the sole viewing objective is to physically and mentally wind down, was the second most common mode in this study, accounting for 17% of moments.

In selecting the perfect content for this lean-back mode of streaming, scouts chose something accessible. They don’t hunt for a new favorite. In 46% of relaxation moments , scouts gravitate to a series they’re already watching, and another 21% of moments involve watching an old favorite. Several scouts explicitly mentioned selecting a particular show because they knew it would be mindless, fun, and light—good vegging out material.

“Netflix and chill” is also a measurable thing. 67% of all relaxation moments are streamed via Netflix and 25% included a significant other (both are the highest by far for any mode). Maybe that’s also why this mode received much higher enjoyment ratings than other modes, with 92% giving it the top two ratings?

At the other end of the spectrum, streaming to kill time had the lowest satisfaction ratings. This mode accounted for 11% of moments, somewhat lower than we might have expected. But it was, unsurprisingly, the least TV dependent, with 27% of moments at a computer and 47% on a mobile device. Like the relaxation mode, scouts picked something “easy” to watch. And scouts predominantly chose comedy for this mode (60% of moments). Even though we’re picking comedy, it can’t outweigh our frustration with having to kill time: 53% of these moments were rated unfavorably.

Finally, the traditional lean-in mode of entertainment, where the viewing objective is immersive and satisfying engrossment, accounts for 47% of streaming moments—it has yet to lose its prominence as a major mode of consuming media. In describing these moments, scouts spent almost all of their 60-second video entry animatedly talking about the show or movie itself. Usually the content was drama (51%), but it was also comedy (26%), kids’ shows (14%), and sometimes non-fiction (11%). The moment was about the media, and the media alone. That focused engagement is what keeps this mode connected to the traditional behaviors we associate with prime time.

Yet these new lean-in moments are also shifting. While they are still heavily weighted to TV shows (82%), they are moving away from the TV itself (53%), onto mobile devices (36%) and desktops (11%). And these are solitary moments—74% were spent alone. We’ve come a long way from the whole gang gathered in the family room at prime time.

Through a single remote moments mission, we were able to gain insight into the way traditional lean-in entertainment has evolved from watching to streaming, and the new roles streaming plays now that it’s untethered from the TV and freed from broadcast schedules. Sampling moments from scouts across the US over just four days, we found that streaming is now incorporated into our days as we please, and used as a means to a variety of ends, shaped by our moods and contexts.

Co-creation and decision making in the freezer aisle

A CPG product manager approached dscout with a conundrum: Americans are eating healthier but cooking less. How can their brand capitalize on the changing attitudes of new dinner decision makers and what do new buyers want to eat?

Rejection, disappointment and badness. Oh my.

Have questions about dscout? Let’s talk.

We can help get your qual research in-field faster than you might think possible.

Researchers: Talk to an expert about how dscout fits your research needs.

If you’d like to participate in research projects on dscout, please visit our Scout page or download the dscout app (for iPhone or Android).
Scout questions? Contact [email protected].

dscout and the dscout logo are trademarks and People Nerds is a registered trademark of dscout, Inc.

Sign up to see how dscout helps your company
understand the people that matter to you.