Dan Makoski no longer believes in the inspired genius.

The design sherpa for a range of imaginative journeys—including of voice-triggered interfaces  and modular mobile phones— he’s seen how true innovations emerge. And he knows those visions rarely spring from the minds of those mythological wunderkinds who we like to put on pedestals and call divine. The most-loved ideas, in fact, come from the most ordinary people — the 99%, you might say.

Dan was a designer and researcher for Microsoft during one its most explosively creative periods, and he was Motorola’s chief designer for Project Ara. Most recently, he led Capital One’s design team to explore ways of connecting people and money in more human, understandable and encouraging ways.

But what stands out most in listening to him is his unshakeable belief that before designers go off and start making things, they should discover what regular people might make — the people who would, you know, eventually use the things.

Dan recently sat down with dscout to talk about the role of co-creation — aka participatory design, or selfless design — in the complex process of making things for people.

dscout: You were introduced to co-creation as a young designer, long before you started design research. What was your initial reaction?

Dan Makoski: Honestly, being a self-centered designer, my first reaction was one of defensiveness and skepticism.

It was back in New York, when I had my first high-profile design job. It was at Studio Archetype, which was the baddest-ass digital design firm at the time, and we were redesigning a website for United. I’d worked for the very first time with researchers; I didn’t quite know if they were to be embraced or not.

I’d worked for the very first time with researchers; I didn’t quite know if they were to be embraced or not.

They brought in a dozen people, and did this thing called paper prototyping, which I had never seen before. I was like “What are you doing? You have these people come in and sketch out what they imagine they would want from their home page at United? That’s my job!”

As the project unfolded, I realized the insights we gathered in that first week, from a dozen ordinary people, were the keys to unlocking the most complicated and challenging information-architecture problems we encountered.

I humbly took the researchers aside and said, “What is this stuff that you do? Where does this come from? How can I learn more about it?” They introduced me to all kinds of stuff, but the most important thing was they introduced me to Dr. Elizabeth Sanders.

She’s fantastic. She’s not well-known in the US design community, but she is kind of the mother of co-creation and participatory design.

Basically, she said there is no such thing as “experience design,” because you can’t design experience. And again, I was like, what is she talking about? I just that week had gotten my first business cards that said, “Dan Makoski, Experience Designer!”

But Sanders said that experience is something that people have on their own. You can’t create it. Experiencing is in people, a very intimate kind of inaccessible. So as a designer, you have to have a little bit more humility.

But, she said, you can design for experience. And that one three-letter word—“for”—completely changed my career. I think it was in 1999. Since then, the rest of my career has been spent finding ways that we can introduce “for” into our practice.

You’ve become something of an evangelist for the “participatory” approach. How challenging is it to bring other designers around to this perspective?

It’s not been easy. I actually think it’ll be a lifelong, uphill battle.

The typical wisdom is: Don’t ask people. They say “I hired you to be the amazing designer. Why are you bringing in these other people? They don’t know what they want.” The mythology in Silicon Valley, and in design in general, is that we operate under the rule of the inspired genius.

That is starting to give way a little bit, as design thinking—this whole idea of starting with empathy and going out and studying the tribe, and then using that as the fuel for prototyping—becomes more accepted.

How can you get regular people to be effective as designers?

You have to create tools for collaboration with everyday people. Everyday people don’t use the same tools that professional designers and developers use. They’re not using Photoshop or code.

The reason I have a jar of Play-Doh on my head in some of my profile pictures is that Play-Doh and markers and paper and Post-its, just ordinary tools of expression, are actually the most sophisticated tools of innovation. You give those to ordinary people to talk about their hopes and their dreams for what they want.

Are there any design projects you’ve worked on where co-creation had a starring role in the process?

When I joined Motorola, and I was leading design research, we were trying to think about what kind of smartphone we should create now that Google was in charge. This was in 2012, 2013?

We started with graphics research in about twenty households in San Francisco and about twenty in Chicago. We had people do photo journaling, create little maps of their homes showing where all their devices lived, and how their devices moved.

At the very end, we did a co-creation step. We went to the house with a suitcase. Inside it were these preformed squares of all different sizes, coated with whiteboard paint so they could become props for whatever someone wanted to turn them into. There were tiny squares that could turn into a watch face, if you wanted to, or two squares that you could turn into a flat-screen television, and everything in between.

We’d be sitting there with the family, and we’d do a little bit of brainstorming of what they imagine the future could look like in the next three to five years. Then we said “We want you to prototype and role play a day in the life—five years in the future. You take the suitcase.”

We left the house, and the family would prototype. Then we would come back and basically pretended like we were a film crew. We’d say “Lights, camera, action,” and for the next twenty minutes, the family would walk us through how their life would be better, using their ideas, in their environment.

Such an open-ended exploration. Did you see any consistency in their prototypes or role play?

Across all these households, we saw the one thing that stood out was a lot of use of natural voice. People just talking to screens and devices. At that time, Siri hadn’t come out. Google Now didn’t exist. There weren’t a lot of voice interfaces. It wasn’t common.

The engineering team actually had hardware that allows you to always listen for a trigger word. This was before any of that was created at Apple for Siri or at Amazon for Alexa. We created the very first version of that. It was “OK, Google Now.” It was one of three features of the Moto X, and it was the most loved feature of the phone.

There are other examples, too. Work we did on Microsoft Surface, and then of course Project Ara, which we did with dscout.

Have you ever had a situation where co-creation really didn’t work?

I’ve never been in a situation where there’s been a horrible co-creation disaster. Partly because I’ve always just been so intrigued and enthusiastic about hearing what people want. But there’s a few places where co-creation can go horribly wrong.

First, the dynamic really changes if you’re asking people “what should we design?” The question you should ask in co-creation is, ‘What are your hopes and your dreams, and show me what that might look or feel like.’

The question you should ask in co-creation is, ‘What are your hopes and your dreams, and show me what that might look or feel like.’

The second thing is, co-creation can go really wrong if the researchers facilitating really don’t believe or really don’t care very much about what people think. When the researchers don’t have a genuine interest in understanding the people’s dreams and hopes, people know that and don’t feel comfortable sharing.

I would say the last principal of co-creation is: it is really hard to be creative. When you ask someone “Hey, pitch an idea for me,” that is really daunting, right? Let alone, “Now try to prototype it.” Or even worse, asking them to use improv to role-play a scenario in front of people. It’s not comfortable for a lot of people.

I think what’s really important with co-creation is to introduce it only at a place in your relationship-building where you’ve done what Liz Sanders called “sensitizing.” It’s a number of steps you can do before co-creation to lower people’s barriers of fear of failure. Give them a space and maybe some ideas on how they might create.

If you give someone a Sharpie and a Post-it, and you’re like, “Create an iPhone,” they’re like, “What are you talking about? This is a Post-it.”

Sometimes you have to kind of guide, and encourage, and facilitate. Typically, I use co-creation after two or three other methods that build trust, rapport and a little bit more space for creativity.

Can you elaborate on something you said earlier, about co-creation emerging as more than a research method into a way of creating experiences and products?

I feel like we’re at a turning point as a global civilization. The way that we talk about people and business is actually really limiting. We use the word “consumer,” and “user,” all the time. What’s truly interesting and somewhat offensive about that is, when you talk about someone as a consumer, you’re only talking about their role as someone who acquires objects, or acquires services; or as a user, just that part of your life, the tiny little sliver of your life where you’re making use of something.

What I’m going to tell my kids is that, “Your role as a human being is to understand your unique gifts and talents, your passions, and to create. To create solutions, to create experiences, to create things that are having a positive impact on the world.”

There are varying levels of creating; from original pieces of composition for artists, all the way to the way that I put together my wardrobe, is a creative act. It makes me think that, as a society, we’re kind of at the end of the industrial era, and we’re at the beginning of what I would call the creative revolution, which is where businesses and individuals are going to start to create products and experiences that allow for human creativity to flourish. 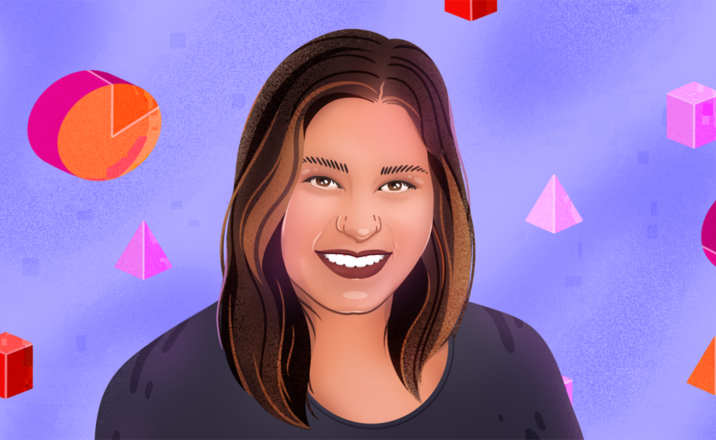